The guitar fretboard is a very mysterious and complex playground, no doubt about it. The video on this page show you a variety of ways of playing the very same thing, in this case the most elementary scale there is: the C major scale, all the natural notes. It can be very discouraging to a beginner to find out that there are countless things to learn in countless positions ... ▼

Don't let it overwhelm you, though. Just because there are countless ways to play any given chunk of music doesn't mean you have to know them all down pat. There are certain positions that work best and these are the ones you will be playing most often, so over time, practice and learn them. It takes a long time for the layout of the fretboard to make sense, but it will if you keep playing, exploring and experimenting.

Scales are a great way to get your fingers working properly, to learn how to move from string to string smoothly, to coordinate the picking hand with the fretting hand, but don't become obsessed with learning every last mode at breakneck speed. There is a saying that goes "if you practice scales, you'll wind up playing scales" and music is more than scales. Scales are in fact the breeding ground of much more useful musical entities, namely chords, and this is where I recommend you invest your practice time. By knowing as much as you can about chords, you'll be learning all about scales without even knowing it.

1 - I start out by playing the C scale on one string. This is something you will probably never do, but it is the best way to show you the formula for the major scale that you should commit to memory: Tone Tone semitone, Tone Tone Tone semitone. You'll be able to see that graphically, right on the fretboard when I finish playing it. Remember that a tone is two frets, a semitone is one fret. I've made the roots — the C notes — green. This is by far the most impractical way of playing the scale, or anything else, on a guitar.

2 - This is how to play the C scale down near the nut, using open strings as they become available. Notice that I start on the same root as (1), but that I then move to the open D string for the second note. Since the C scale is C D E F G A B, there are two other open strings that can be used, the G and B strings. That end note is the same C as the one way up the neck in version (1).

3 - Here I'm starting on the same root, but I'm finding subsequent notes on the 'other side' of the root than version (2). I don't use any open strings in this version. Once again, that end root is the same note as in version (1) and (2) but in yet a new position. This pattern is very comfortable and compact and is moveable, in other words, you can start the pattern up one fret on C# and play a C# scale; move it down one fret, and you'll be playing the B scale. This is a good one to learn.

4 - Here I start on the same root but I play three notes-per-string and I wind up on the same root as example 3. You really need to stretch for this one and I wouldn't recommend this as your default pattern.

5 - Now I'm starting on the 6th string -- the thick string -- and using positions to the left of it (looking down at the fretboard) and winding up on that same root on string 3. Remember that in all these examples I'm playing the notes C-B-D-E-F-G-A-C.

6 - I start on string 6 again but this time I'm using notes to the right of the root and ending way up at the 10th fret. This is a nice compact way of playing a major scale and, like any other pattern on a guitar fretboard, is moveable. If you move the whole pattern down in pitch (to the left) 3 frets, you'd be playing the A major scale.

7 - This last one I threw in just to show you how odd it can get. In this example, I start on string 6 again but I find my second note, D, on the open 4th string. Then I play the next note (F) on string 5, but move to the open 3rd string for the next note in the sequence, G. Then I grab the next note (A) on the 7th fret of the 4th string, then play the open B string, and end on the same root as in the early examples. Crazy, eh?

So there you go ... complicated enough for you? It does seem awfully tricky, doesn't it? And I've only shown you a few here! There are many more ways to play any given scale. Don't worry, you will come to grips with this maze of possibilities.

Below are some major scale patterns that you can twang away on. These can all be moved up or down the fretboard (meaning right or left in these images) and whatever note you start on will name the scale. The numbers indicate the scale degree for each note. R stands for Root, which can be seen as either 1 or 8. Two start on the 6th string, two on the 5th and the other two on the 4th string. 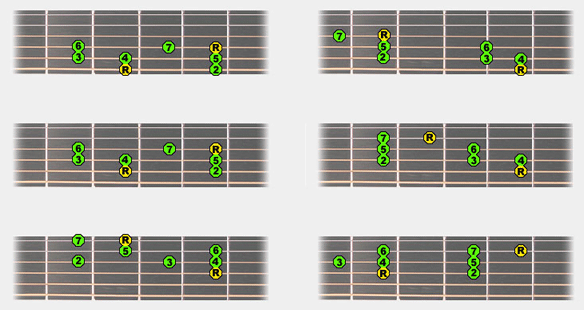 Once again, there is no reason whatsoever to pull your hair out over this. Scales are good to know about and you will eventually come to terms with them all. The best thing about scales, especially the Major Scale, is that from it come the most useful and powerful musical entities of all: chords. But before we get onto that huge topic, let's just see what other kinds of scales there are.