Chords emerge from scales, as you saw earlier on, and eventually you will want to know the names of the individual notes that make up chords, but the guitar is such that you don't really need to clutter your brain up with countless letters and numbers to keep track of chords. The shapes do that automatically for you, and you'll see just how powerful that becomes when we look at barre chords ...▼

These three open minor chords are almost identical to their major counterparts, even though musically they are barely related (the A minor chord comes from the Am scale, which is from the key of C, not A) but the layout of the fretboard is such that we guitarists can literally see the various chord flavors just by their shapes. In this case, you should see that the third in these shapes has been lowered in pitch by one semitone, turning the major chord into a minor chord.

If you watched the video 'What chords are and where they come from' (top of the 'Chords defined' page), you'll have a pretty good understanding of why there are two main flavors of chords — major and minor — and that the only difference is the interval between the root and the third. The vast majority of chords you will encounter in music are either major or minor or 'extended' versions of major or minor, so keep that in mind when you start getting bogged down trying to sort through all the other less common flavors.

Here are the 3 open minor chords

The green dots show you where to put your finger tips. The red crosses mean 'Don't pluck/play this string'. The blue numbers indicate the best left hand fingers to use. 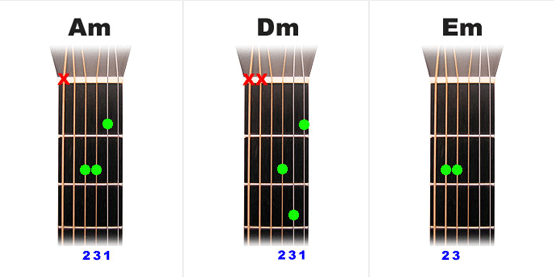 Once again, the important thing to understand is that these three chords have the same quality — minor — even though they look different. Compare these three to their major counterparts on the previous page and you'll see that only one note has changed: the third (3) has been lowered in pitch by one fret, or 'flatted' (some prefer to say 'flattened'). So you could say that minor chords are just majors with a flat 3. The open C and G chords do not lend themselves to be 'minorized' like the A, D and E. You will need to learn how to make barre chords to play Cm and Gm. In the meanwhile, there are countless tunes that use the open chords you see here and on the previous page, so learn them and learn them well. Once you are able to quickly get your hand/fingers to grab these shapes and hold them down cleanly, you'll be able to start to string them together into the basic structures of tunes — chord progressions — and you'll need to move between them smoothly and accurately.